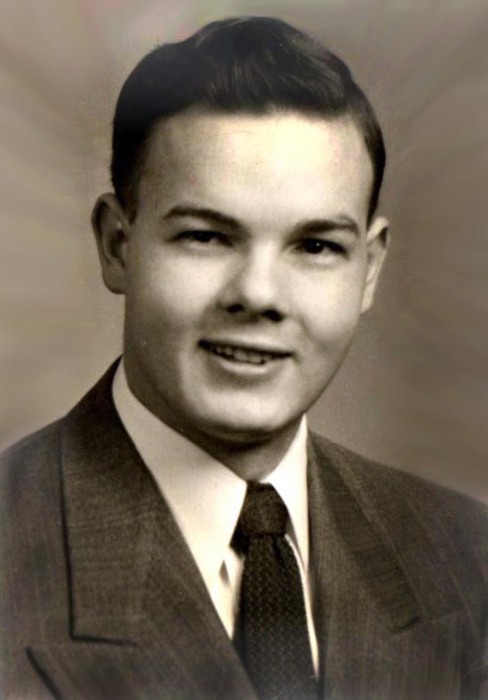 John Robert Smith born in Lewistown, Montana to John Clarence Smith, Jr. and Mabel Cox Smith on November 9, 1927.  And on March 8, 2022 was “born again” into Heaven by the power of Jesus.

John is a veteran of World War II and the Korean conflict.  With the help of the GI Bill, he graduated from the University of Montana with two majors, Business and Psychology.  He then helped his older brother Jack Barney and older sister Betty Smith-Douglass start a rattan furniture business in Fresno, California.

Later, he moved on to Phillips 66 Oil Company, where he met the “love of his life”, Emma Lorraine Bartel-Brewer, a widow with three young daughters, Carolynn Gaile, Colleen Jan, and Candice Jane Brewer.  He always considered that his greatest accomplishment and happiest adventure began on their wedding day.   April 2, 1960, the day he became a Husband and Father simultaneously.  A year later, their family grew with the birth of Patricia Ellen Smith.

The majority of John’s career life was as a Probation Officer.  As such, he created an educational program for inmates at the Fresno County Honor Farm.  And with volunteers from The College Church of Christ, 70% of the participating inmates never returned to jail and lead productive lives.  He then followed this up with another success - his job training program in conjunction with Fresno City College and local businesses.  Even after several years of retirement, people still came up to him to thank him for his help, and for not giving up on them.  His dedication and work truly accomplished the stated goal of Fresno County’s Probation Department:  Protection of the community through rehabilitation.  He once explained to his young daughter Patricia that “I help people, who our community gave up on, earn better lives.”

John and Lorraine were members of Peoples Church since 1966, and for years volunteered together for the Church’s Contact Line to help lonely people in crisis.

Donations can be made in his honor to “Veterans of Foreign Wars” (www.vfw.org).

“And God shall wipe away

all tears from their eyes;

and there shall be

neither shall there be

100. All Creatures of Our God and King