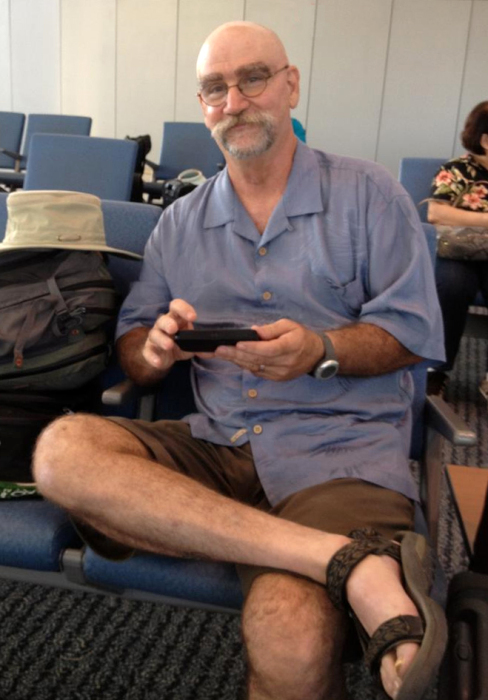 We would like to offer our sincere support to anyone coping with grief. Enter your email below for our complimentary daily grief messages. Messages run for up to one year and you can stop at any time. Your email will not be used for any other purpose.

Albert Sidney Newton, Jr. passed away on Friday, August 26, 2022, after eventually succumbing to complications 10 days after a massive cardiac event. He was born on July 27, 1950, in Oakland, California. He attended California State University, Fresno.  He was married twice before finding his final love with Carol Ann Meme for the past 18 years.

Affectionately known as Boopie by his sisters, and Granddaddles by his granddaughter, Albert was an entomologist. He worked for both UC Berkeley and UC Davis at the Kearney Research Station in Parlier for more than 40 years, specializing in aphids and corn leaf hoppers.  He was THE go-to source for all bug and insect identification, always happy to help his family and friends when they texted pics of whatever they had encountered. He retired in 2010 but remained friends with his beloved colleagues.

He enjoyed traveling with his wife Carol Ann (known as Meme to friends) especially to Italy to visit favorite locales and family, and he always made room in his luggage for several pounder bags of Peanut M&M’s.

An avid baker, his delicious creations were eagerly anticipated at family and neighborhood gatherings. Cakes, pies, breads, Italian desserts – he could and did do it all. He was a very generous gift giver who delighted in other’s joy at a personalized gift, like a “pie of the month” club he created especially as a gift for a family member.

Albert had a slightly cracked sense of humor; he enjoyed delighting and shocking his audience and was good at both. You knew you would be laughing either way when you spent time with him. He loved watching old horror movies (the gorier the better), classic film, and true crime tv. He also listened to Doctor’s Radio podcast and enjoyed perusing WebMD, amusing his friends with the hypochondriasis it inspired. His friends relied on his “medical knowledge” for their many ailments.

A self-proclaimed “He-Man”, Albert didn’t let a quadruple-bypass, a crumbling spine, and arthritis hold him back from being active. Almost every morning, Albert would rise early to go for long walks in Woodward Park, often with his dear friend Stephanie and his sister, Burlene. He greatly enjoyed the outdoors, hiking and kayaking with his brother-in-law and son Alex. He was known for his signature look of baggy cargo pants, pocket tee-shirt, and floppy sun hat, not to mention his various gadgets he always had on hand. His recent hobbies included guitar lessons and spending long hours relaxing with his French Bulldog Lucca.

Albert is survived by his wife Carol Ann Meme, his daughter Elizabeth and son Alex, his sisters Burlene Krieder (Gerald), Alice Branam and Suzan Johanson and their families.  His father Albert, SR. and his mother Grace preceded him in death. His beloved dogs Pearl and Lily await him in paradise.

“And God shall wipe away

all tears from their eyes;

and there shall be

neither shall there be

To send flowers to the family or plant a tree in memory of Albert Sidney Newton, Jr., please visit our floral store.

A Memorial Tree was planted for Albert Sidney

Join in honoring their life - plant a memorial tree

You can still show your support by sending flowers directly to the family, or by planting a memorial tree in the memory of Albert Sidney Newton, Jr.
© 2022 Wildrose Chapel & Funeral Home. All Rights Reserved. Funeral Home website by CFS & TA | Terms of Use | Privacy Policy | Accessibility